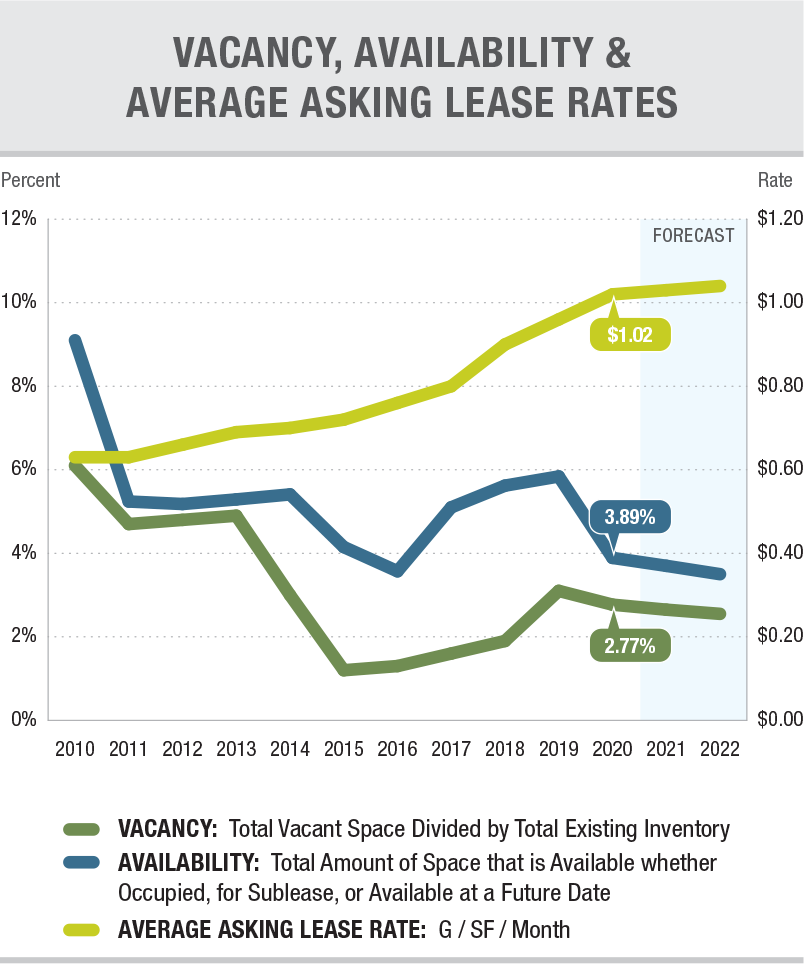 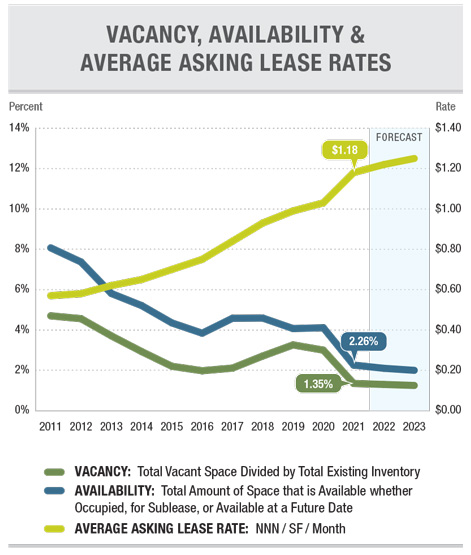 The Orange County industrial sector again set records in the final quarter of 2021, just as it has each and every quarter for years. Local business owners continued to have a tough time finding quality space for their growing operations. Even the latest version of the virus hasn’t put a dent in market momentum. Asking lease rates and sale prices both jumped substantially but reported averages don’t tell the whole story when property is offered without an asking price. Tenants and buyers are facing fierce competition to secure space — lack of supply is making it nearly impossible to find high quality industrial space and not a single new building was delivered in the final quarter. The existing inventory is proving incapable of meeting current demand.

The overall vacancy rate in Orange County fell to 1.35%, a 26-basis-point drop and a new record low. But, as we have been reporting, a significant chunk of the available space is more than 30 years old or is showing signs of functional obsolescence. So from a practical point of view, the vacancy rate is approaching zero. Tenants and buyers continue to compete aggressively for product, which is promoting the rise in lease rates and sales prices. The availability rate, which includes space offered for lease or sale but is still occupied, fell to 2.26% from 2.56% in Q3. That tight spread to the vacancy rate is indicative of an increase in lease renewals, as tenants are opting to stay in their current locations because they are unable to secure alternatives.

The average asking lease rate for the county jumped $0.06 to $1.18 in the final quarter, another record high. Landlords maintain a significant advantage in lease negotiations and many deals are being done without free rent or tenant improvement contributions. With such intense competition for space, it is common for final lease rates to be well above asking. So, published asking rates can be misleading. Also, some buildings are offered without an asking rate, while others are leased on an off-market basis and don’t make it into the published statistics. 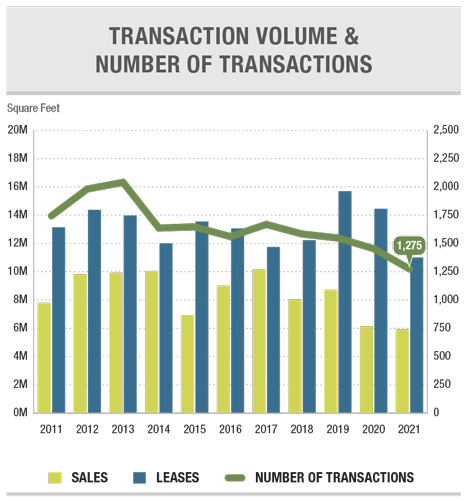 The county’s average asking sales price broke the $300 PSF barrier for the first time in Q3, and then took a big leap of $23 PSF in Q4 to a record high of $323.14. Moreover, some smaller buildings with good amenities and location are trading in the $400 PSF range. Off-market deals are becoming more common as buyers are making aggressive unsolicited offers in the hope of securing a new building without having to face the intense competition associated with listed properties. Last quarter we characterized the sale market as being on fire and that is still the case.

Leasing and sales activity, both in terms of square footage and number of transactions, fell again in Q4. However, that is due in large part to the lack of supply forcing tenants to renew in place, which often is not reflected in the quarterly statistics. Only 2.7 MSF of deals were inked during the current period, down from over 4.4 MSF in Q3. In all, 243 transactions were completed during the period — 173 leases and 70 sales, as compared with a total of 218 leases and 94 sales in Q3.