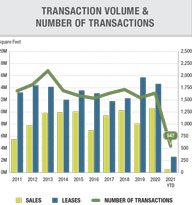 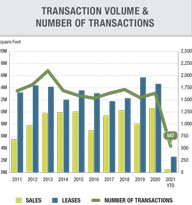 The Orange County industrial sector continues to outperform its office and retail counterparts, both of which have suffered heavily during the pandemic. All major submarkets in all size ranges have thrived during the crisis and that trend continued in Q1. Demand is still running well ahead of supply for both lease and sale product, pushing sales prices and lease rates up. E-commerce activity did the heavy lifting in the early stages of the pandemic, but activity across multiple sectors has strengthened of late. Mortgage interest rates are still historically low, but they did rise substantially in Q1 because of the spike in the 10-year Treasury yield. That was not enough to dampen demand however, as owner-user buyers continue to line up to pay record prices for good quality freestanding industrial buildings.

The overall vacancy rate in Orange County remained near its historic low at just 2.48% despite ongoing virus protocols. Those tenants and buyers who waited for the market to soften during the pandemic have been disappointed, as quality product is now even more difficult to find. Fullerton and Buena Park saw significant vacancy declines in Q1, ending the period at just 1.68% and 0.47% respectively. North County still has the lowest overall vacancy rate of all five major submarkets at a scant 1.68%. South County vacancy fell sharply from 4.02% in the final quarter of 2020 to just 2.79% in Q1. The countywide availability rate, which includes sublease space, fell slightly to 4.01%, confirming that concerns over an increase in sublease space were unfounded.

The average asking lease rate for the county spiked in Q1, adding five cents to reach a record high of $1.06. Landlords are still holding the line on asking rates and strong credit, personal guarantees and hefty security deposits, as multiple tenants are competing for the same space. Tenants are now convinced that making aggressively low offers, as many attempted last year, is not a successful strategy.

Sales prices moved from $268.49 in Q4 to a record high of $282.67 on a countywide basis. That brought the year-over-year increase in industrial property values to a whopping 14.4%. Demand from owner / user buyers became even more intense in Q1, as incentives from the SBA were reintroduced to stimulate activity. Owner / user buyers can borrow 90% of the purchase price at a blended rate in the mid-3% range even after a rate spike for 504 loans of more than 80 basis points from January to March. Tenants looking to buy seek to build equity for themselves by paying down their own mortgages rather than sending a check to a landlord each month. The fixed-rate, fully amortized loans also allow them to secure long-term occupancy costs.

Lease and sale activity was down in Q1 after a strong flurry of year-end closings in December of 2020. In all, 307 sale and lease transactions were completed in Q1; 264 leases and 43 sales compared with a total of 292 leases and 110 sales in Q4. The total amount of square footage leased and sold was well off Q4’s pace, falling by half due to a smaller number of transactions in the upper size ranges. Variances like this are not uncommon, as Orange County is made up primarily of buildings under 100,000 SF, and just a few large transactions in any given period can cause a big swing in quarter-to-quarter results.